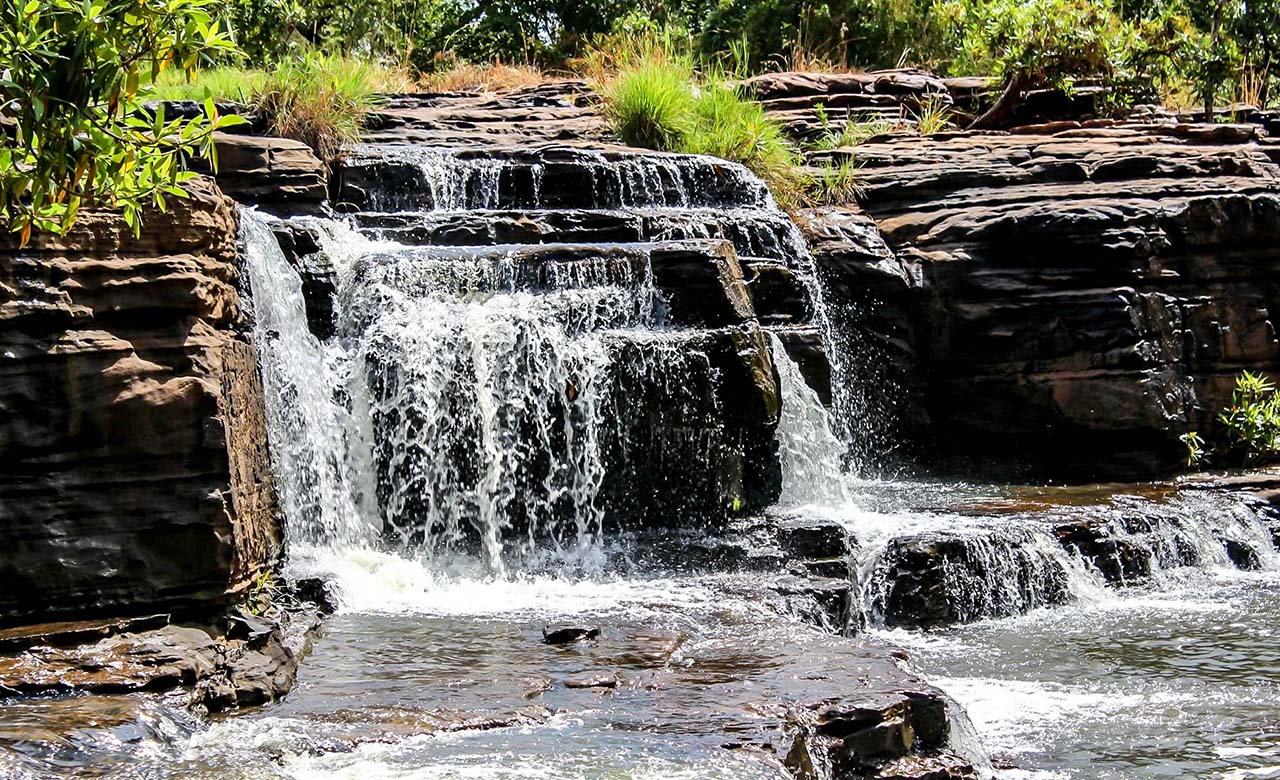 Situated in the extreme South-West of Burkina Faso, the Cascades region is bordered to the North by the Hauts Bassins region, to the South by the Republic of Côte d’Ivoire, to the East by the South-West region and to the West by the Republic of Mali. It covers an area of 18,424 km², about 6.7% of the national territory and its population is essentially composed of Dioula, Mossi, Sénoufo, Goin, Fulfuldé, Karaboro, Komono, Turka and Tousian. The Cascades region includes the provinces of Comoé and Léraba, whose capitals are respectively the towns of Banfora and Sindou. The Cascade region has seven rural communes and one urban commune. Its climate is of the southern Sudanese type, determined by two main seasons: the wet season which runs from April to October and the dry season which runs from November to March. Average annual temperatures are between 17°C and 36°C, the region enjoys good rainfall and is one of the best-watered areas in Burkina Faso.

The Peaks of Sindou 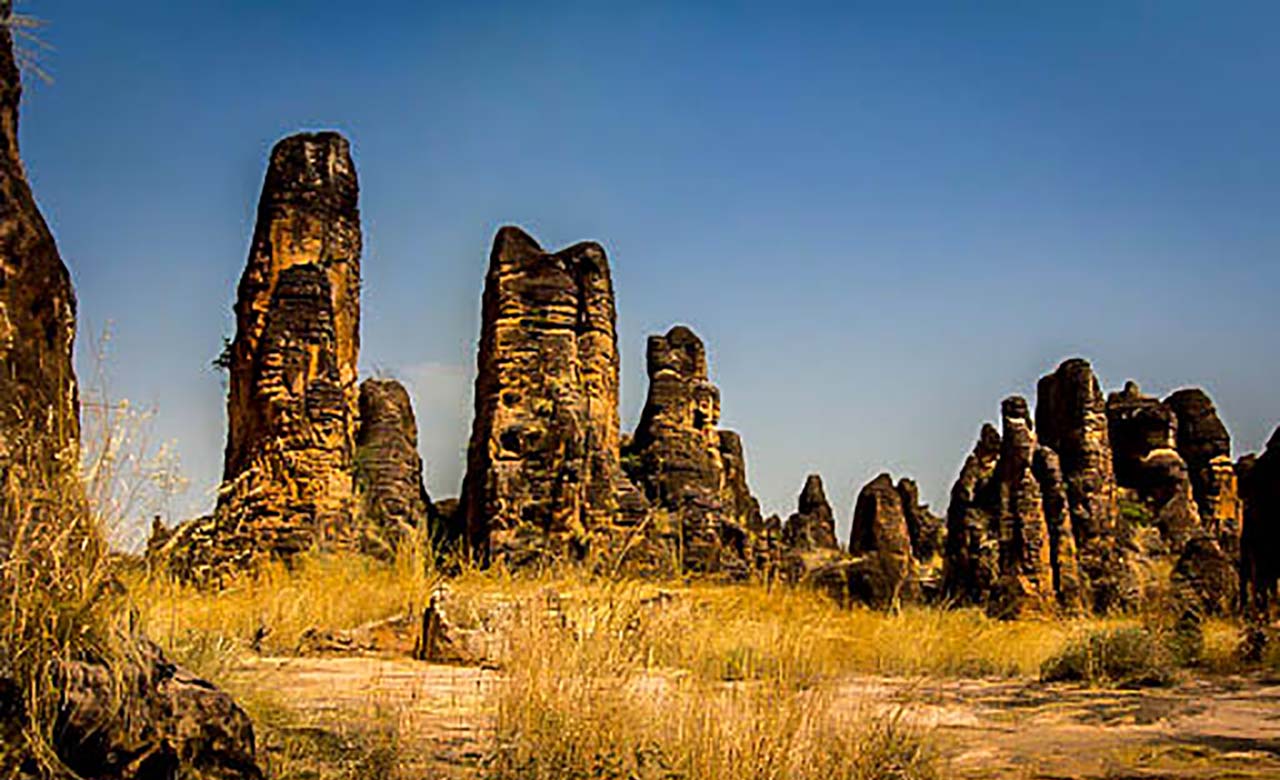 Located in the town of Sindou, about 50 km west of Banfora, the Peaks of Sindou are magnificent cliff formation and one of the most popular tourist attractions in southwest Burkina Faso. Ideal for hiking and camping, the diversity of habitats enhances the biodiversity of the region. These marvelous peaks, from 300 to 440 m in altitude, are considered by the populations to be the ancestors of the Senoufo peoples. According to legends, these peaks were erected 500,000 years ago by geniuses in the time of King Solomon. Cradle of the Senoufo culture in Burkina, Sindou is a magnificent and
magical place. One learns the history of this people who have been able to resist the various external influences and who have managed to preserve very strong ancestral rites. Sacrifices, ceremonies of thanks and recognition are regularly organized. 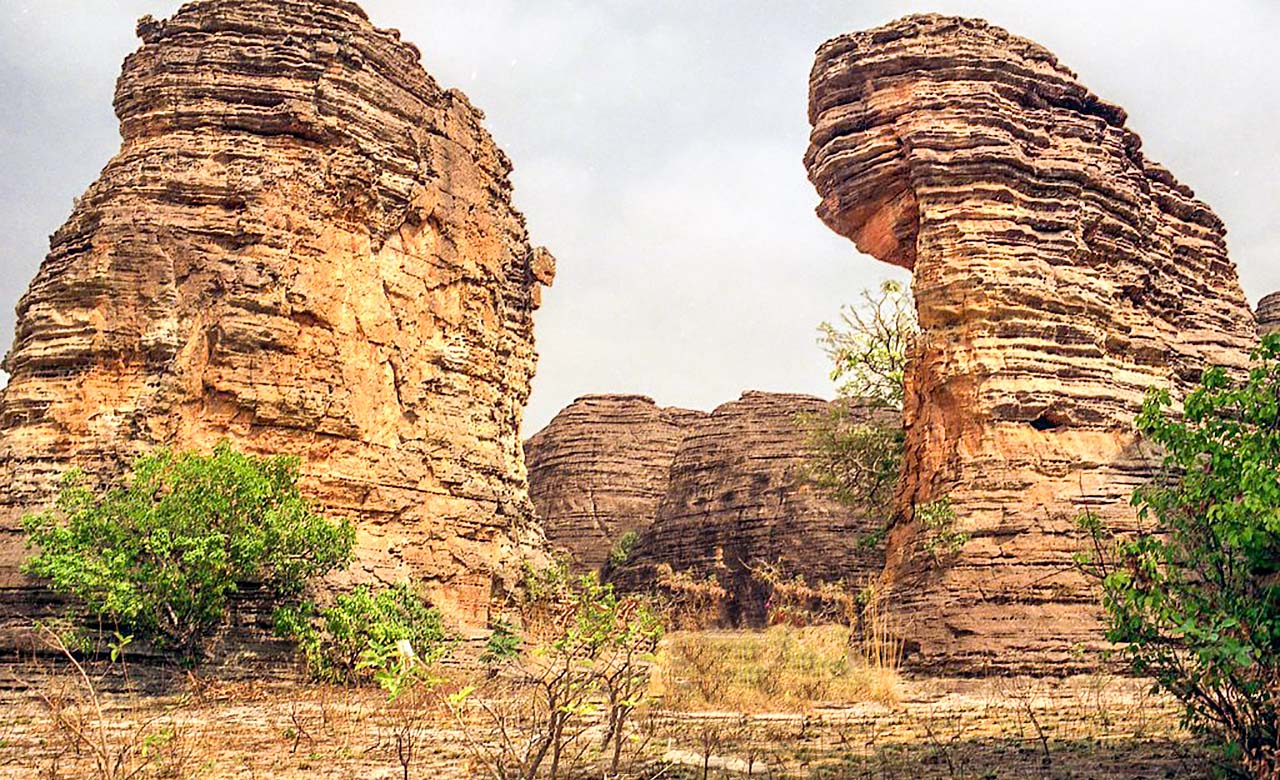 Situated in the province of Cascades, the cliff of Banfora is of great biological diversity and a great wealth of flora and fauna. Its forests contain endemic species but also remarkable species such as Albizia dinklagei, Acridocarpus chevalieri or Warneckea fascicularis and several species of insects such as Dicronorhina kouensis or Stephanorrhina guttata which are found nowhere else in Burkina Faso. The cliff is also home to a large community of rodents, in particular Praomys rostratus in less disturbed areas and highly anthropophilic species such as Rattus rattus in slightly degraded sites.

The forest vegetation consists of cliffs, dense forest and savannah. 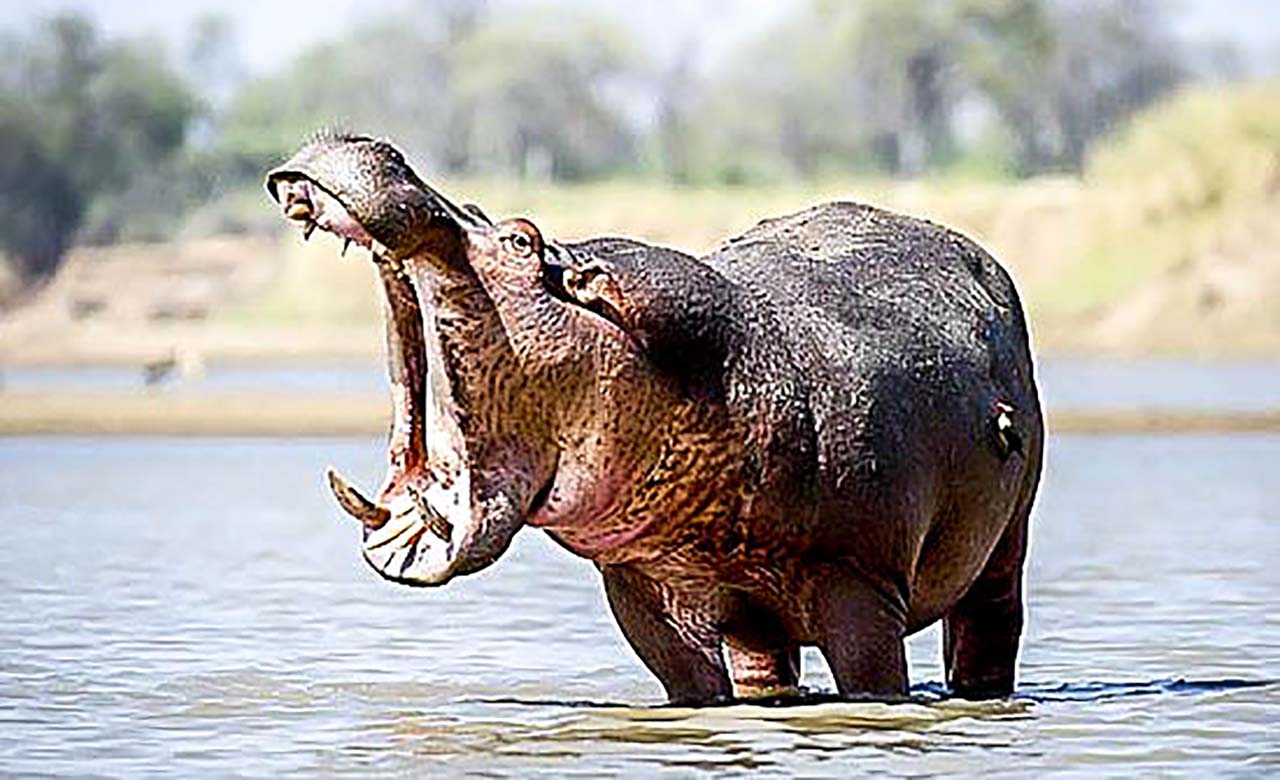 Situated in the region of the waterfalls, Lake Tengrela is one of the best attractions in Burkina Faso. It is a small lake near Banfora which is known for its hippopotamuses. It covers an area of 580 ha and has been listed since 2009 under the Ramsar Convention. The hippos of the lake can be observed either on board a boat or from the shore. They are considered sacred by the inhabitants and have been living in perfect harmony for decades. In addition to the hippos, the lake is also home to several varieties of fish.

Also known as the Cascades de Banfora and located in the southwestern part of Burkina Faso, about 12 km north-west of Banfora, the Cascades de Karfiguéla are a series of waterfalls along the Comoé River. They are one of the most important tourist sites in Burkina Faso. The Cascades region takes its name from these waterfalls. The flow of the falls peaks during the rainy season from June to September and the rustle of water from the top of the falls can be heard hundreds of kilometres away. The waterfalls offer spectacular views and scenery and are a must-see. 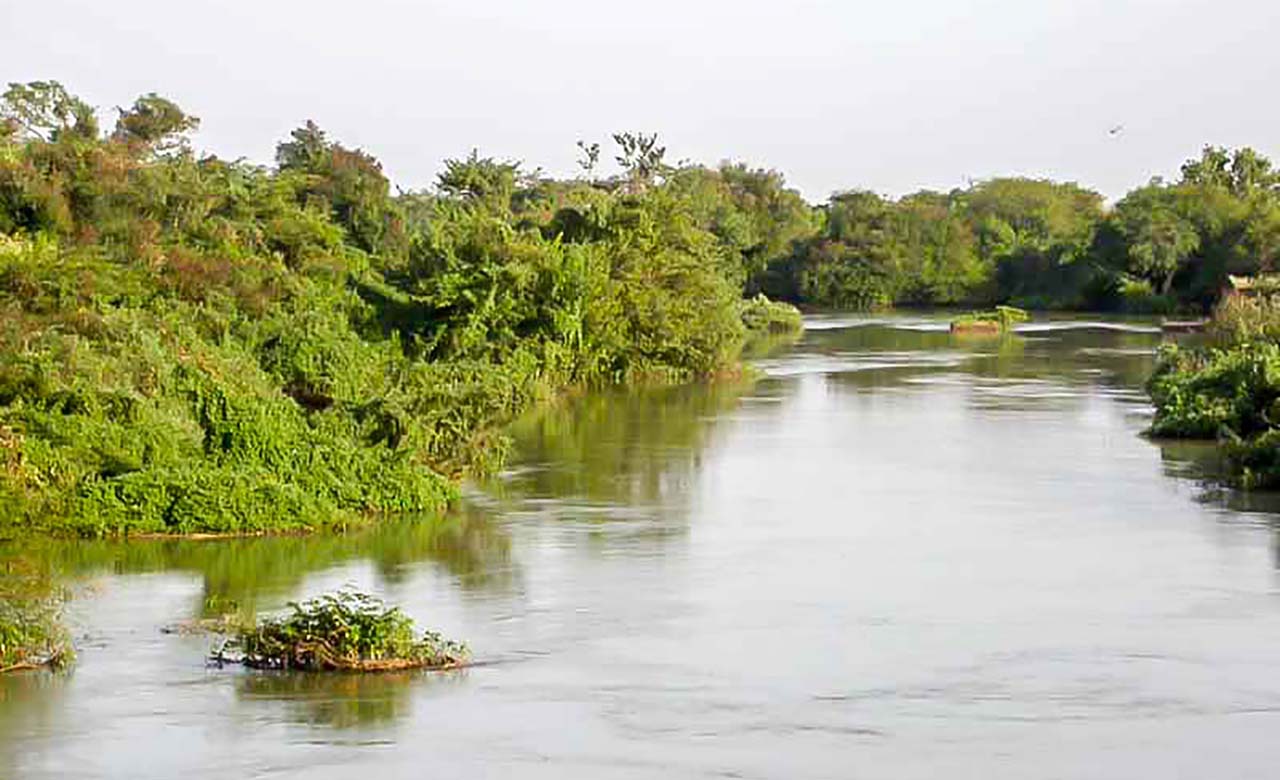 Located in the province of Comoé, not far from the Ivorian border, the Dida classified forest was classified in 1955 before independence and covers an area of 75,000 ha. It shelters a rich and diversified flora and fauna. Among the emblematic animals of the forest are antelopes (hartebeest, duikers, buffalo cobs, hammered guibs), hippos, buffaloes, warthogs, hyenas, birds and small game. Its proximity to the Comoé National Park in Ivory Coast ensures mutual animal repopulation.

Situated about 15 km from Banfora, the Fabedougou domes are bewitchingly beautiful. They are approximately 1.8 billion years old and offer an excellent site for hiking with a magnificent landscape. They are true semi-spherical dome-shaped buildings several metres high forged by nature. Once at the top, you will be able to admire the marvelous panoramic view. To get there, it is essential to wear shoes adapted to the terrain, preferably sports shoes that will facilitate your movements. This wonderful site can be visited all year round. 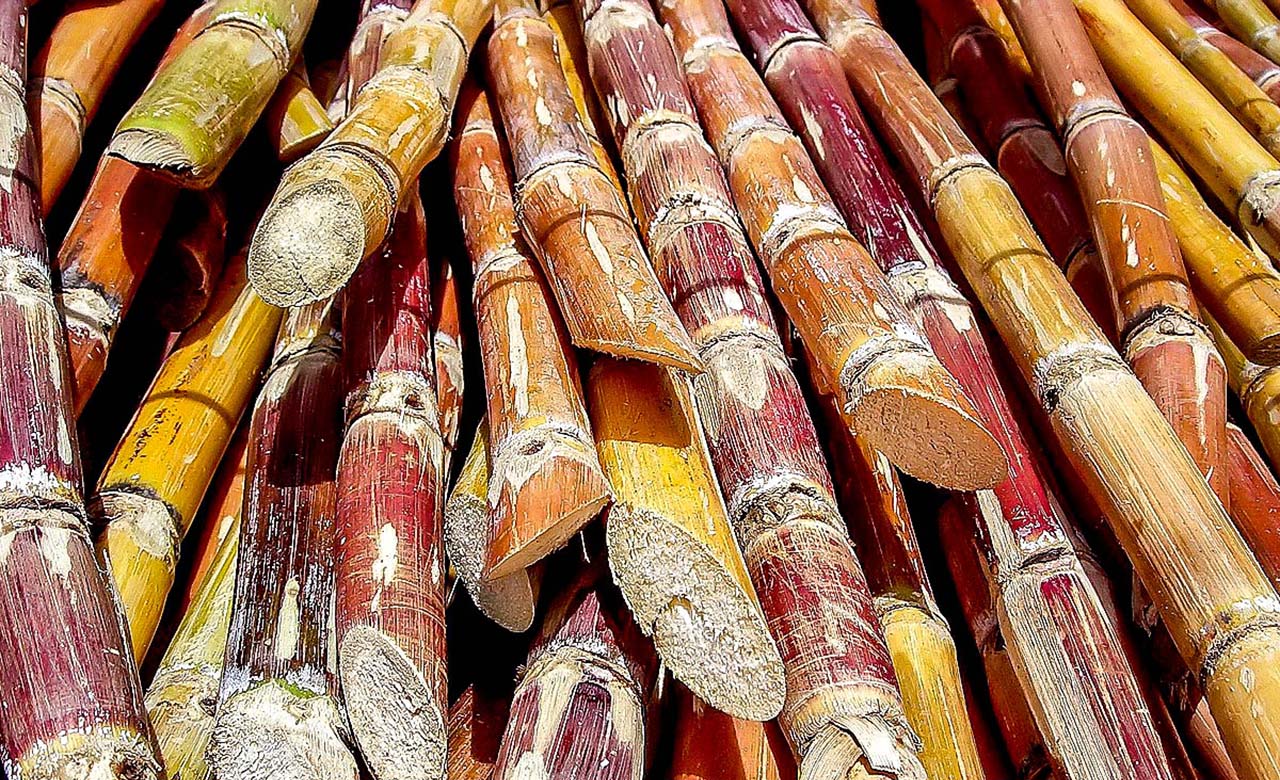 The Comoé region is famous for its vast sugar cane plantations. Irrigation is carried out industrially using pipelines installed in the region, which draw their sources from the Banfora waterfalls. The landscape is dotted with rôniers, a variety of palm tree whose branches end in a fan-shaped leaf and whose sap is used to produce palm wine (Bandji). Near the sugar factory, tractors with their multiple trailers loaded with sugar cane can be seen, which will then be processed and transformed by the Comoé sugar company (Sosuco). Part of the production is destined for export.